Japanese Fans Clean Up Garbage in Stand, Video Uploader: I Didn’t Think This Was Real 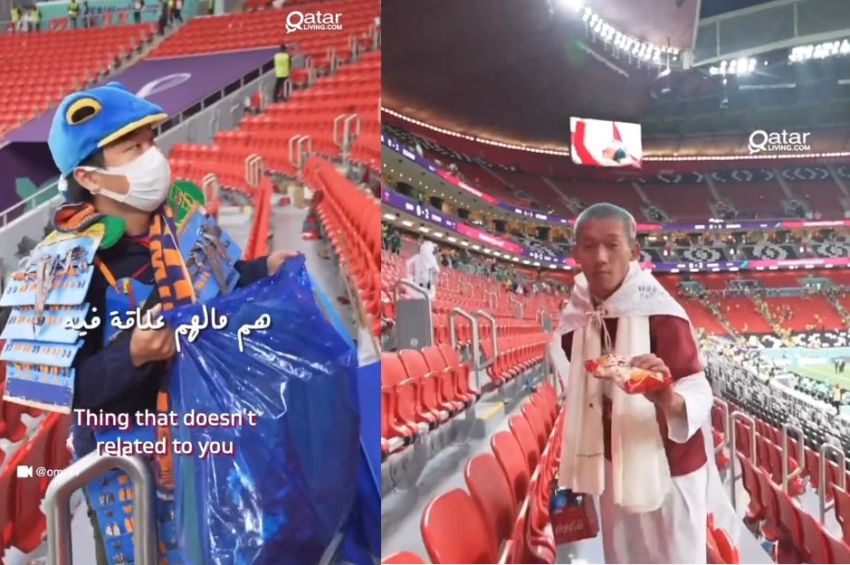 Fans of the Japanese national team carried out an action to clean up trash in the Al Bayt Stadium stands, Sunday (20/11/2022). This action was taken after watching the Qatar versus Ecuador match / Photo: Collage

AL KHOR – Fans Japan national team again setting a good example to be emulated by football fans around the world. They took action to clean up trash in the Al Bayt Stadium stands, Sunday (20/11/2022).

The action was taken after watching the opening match of the 2022 World Cup which pitted Qatar against Ecuador, who won La Tricolor with a score of 2-0. This is known from videos that have gone viral on social media, one of which was uploaded by the Tiktok account, @omr94.

In the recorded images, it can be seen that the Japanese supporters, who were still in their attributes, swiftly cleaned up the rubbish left by other spectators at the Al Bayt Stadium. They help local residents by collecting trash while carrying plastic bags or other containers when other supporters have left the stadium.

Their action received praise from the video uploader who also appeared in the recording. He really couldn’t believe he saw the cleaning action with his own eyes.

“Someone assured me this is normal. The Japanese fans decided to clean up the stadium. This wasn’t even their match!” said the man known as Omar Farooq.

“When I asked them, ‘Why are you cleaning something that is not related to you?’ The answer was, ‘Japanese people never leave trash behind us. We respect the place’,” he added.

“This is something I’ve heard about a lot, but I never thought this was real. Wow. I really respect it!” he said.

Back in 2018, Japanese fans also took the same action at the World Cup. They went viral after being caught on camera cleaning the Rostov Arena, even though at that time the Japanese national team lost dramatically in the final minutes to Belgium in the round of 16.

A year later, they showed that class again at Roazhon Park in the 2021 Women’s World Cup. They cleaned up all the trash left until the stadium was shiny again.

Kupchan: The situation created between Kosovo and Serbia carries the risk of violence

Reporters for the 2022 World Cup are Pickpocketed in Qatar, the Police Do It…

Reporters for the 2022 World Cup are Pickpocketed in Qatar, the Police Do It...