US-Albania relations, today and the future in the evaluations of researchers 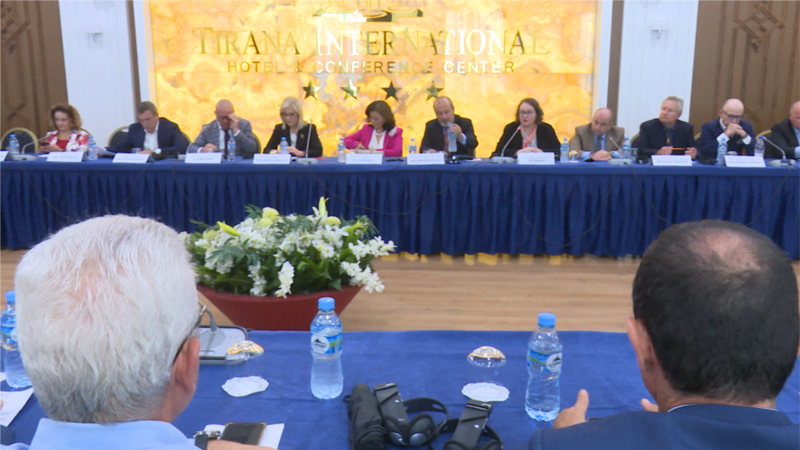 In Tirana, the Institute for International Studies brought together today diplomats, historians and legislators in a conference on the 100th anniversary of diplomatic relations between the USA and Albania.

They examined different historical periods in Albanian-American relations, emphasizing that both sides believe in freedom and the values ​​of democracy, so the close cooperation between the two countries is and will continue in the future.

The Speaker of the Assembly, Lindita Nikolla, emphasized that the USA became the guarantor of independence and statehood for Albania and Kosovo. She said that with the support of the USA, Albania overthrew the communist regime, is building democracy and carrying out Euro-Atlantic integration reforms.

“The United States is the mirror in which nations aspiring to freedom, stable democracy, peace and security, and uncorrupted government see themselves. The partnership with the USA, based on the joint declaration on strategic partnership, signed on April 20, 2015, is the cornerstone of Albania’s foreign policy. – says Mrs. Nikola.

The American ambassador to Albania, Yuri Kim, said that the USA has always supported the Albanian people, starting from the Peace Conference with President Wilson until today.

“I think that the future of Albania will be determined now. There are moments in history when peoples and their leaders face big decisions: Who do they want to be? Who do they want to go? There are moments like 1919, 1920, 1946, 1991, 1997. The USA has made it clear with the words of Secretary Baker: Freedom gives results. You are with us, we are with you. Albania has made its decisions: it wants to integrate into the EU. It wants to remain a close ally of the US. It is moving forward with important reforms that improve justice and reduce corruption. The US is focused on the future of Albania and strengthening relations with it” says Ambassador Kim.

While the former journalist of the Voice of America, Ilir Ikonomi, spoke about Faik Konica, the first ambassador of Albania to the USA, Faik Konica, about whom he has published a book, where he calls him an example for today’s Albanian diaspora, to take part in the life of Albania.

“I decided to speak here about Faik Konica, as a personality that should be appreciated in the 100th anniversary of Albanian-American relations. Faik Konica worked hard as a bridge between two states and two peoples. He was fully involved in the education of the Albanian diaspora and Albanian speakers in Albania with American ideas and culture. Konica also pressured the American and Albanian governments to fight corruption and organized crime with force, and was for strong and independent courts. These are current topics even today. Konica is an excellent example of how the diaspora should participate in the life of Albania. In today’s diaspora it is difficult to find a figure like him, a figure that everyone should try to emulate in deeds. I don’t understand why today the diaspora does not approach Albania neither for knowledge, nor for investments, nor for votes” says Mr. Ikonomi.

The first American diplomat in Albania after the overthrow of the dictatorship, Christ Hill, currently the US ambassador to Serbia, recalled through a video message, how the American embassy in Albania started its activity in two rooms of Hotel Dajti, in the spring of 1991, meanwhile as the first multiparty elections were being prepared in the spring of 1991. Permanent approval was granted in September 1991 and the embassy was fully housed in its headquarters in March 1992.

“Difficult days, difficult times, but we were very pleased that Albania was becoming our ally, and the fundamental thing in 1991 was the great trust that Albanians and Americans had in each other for this resumption of relations between the two countries. In the first days, it was only me, and some first and young employees like Kristina Budina, Andi Dervishi, driver Petriti, who had to keep the embassy open. We had one officer for politics and one for management. Then we returned to the building of our embassy, ​​which during the years of the communist regime was held by Italian diplomats and the work was normalized and continued”. recalled Ambassador Hill.

The US and Albania have built a broad partnership in NATO, the UN and cooperate against terrorism, violators of democracy and aggressors of sovereign countries, the researchers claimed.

“Membership in NATO has connected Albania in the present and in the future with the West. Regardless of the ups and downs, or the steps back, NATO membership has defined a path for Albania without any dilemma” says Albert Rakipi, head of the Institute for International Studies.

The researchers pointed out with concern that the Albanian diaspora in the USA is not involved in the life of Albania, even though it is educated, enriched and committed to be involved in the smooth running of affairs in the homeland.

“We constantly repeat the role of the Albanian diaspora historically, but we have never fully studied its power and capacities and put it in the center of attention. Among them there are very successful professionals, there are many businessmen and investors, they have completed studies in many fields, but while programs are needed to return them to their homeland, they are kept only to bring survival remittances here and even still they cannot to vote for the elections in Albania, although this has often been promised by politicians” says historian Elidor Mëhilli.

The researchers claimed that this year celebrates the 100th anniversary of the beginning of Albanian-American relations, and not 100 years of diplomatic relations, because for 45 years the two countries had no relations between them, due to the self-isolation of communist Albania.

This remains a wide field of studies, they asserted, how it happened, that after such a great anti-American propaganda, the Albanians again embraced the alliance with the USA as strategic and full of trust.

Four Big Issues Will Be Discussed in P20