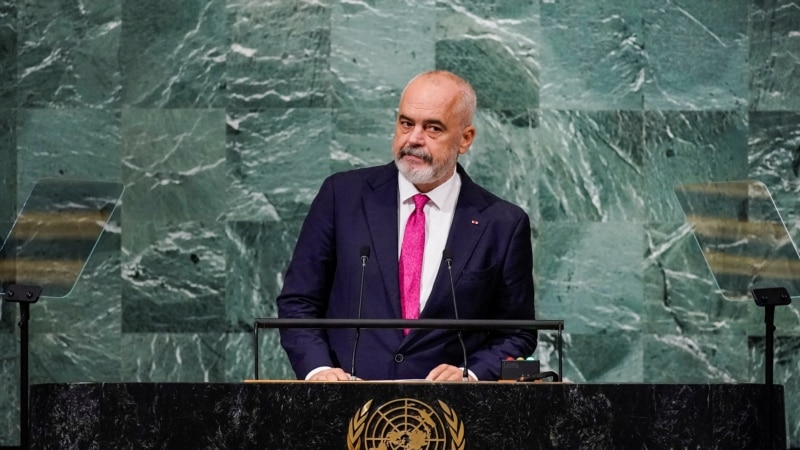 The Prime Minister of Albania, Edi Rama, denounced the Russian aggression against Ukraine on Saturday at the United Nations General Assembly, calling it “an unprovoked, unjustified and premeditated war”.

“The war Russia chose to wage is not only against Ukraine and its people: It is also a brutal attack against international law, a flagrant violation of the UN Charter and a direct threat to the European Security Architecture,” he said.

Prime Minister Rama said that it is about an open war by an aging cynical tyranny against a young and growing democratic demo.

“A country, motivated by dreams of past greatness, has decided to turn the world backwards, to turn against everything we have built over decades. This is unacceptable,” he said.

The Prime Minister of Albania, a country that is currently a non-permanent member of the UN Security Council, expressed solidarity with Ukraine and its people.

“Their struggle is also ours, and I hope, that of all UN members who share the fundamental principles of sovereignty, territorial integrity, freedom and the right to independently decide their own future. , without fear or interference”, said Mr. Rama.

Albania’s prime minister condemned the Kremlin’s recent moves for partial mobilization and referendums in regions under Russian control, saying Albania will not recognize these illegal votes.

He said that Albania supports the adoption of a Convention on the Prevention and Punishment of Crimes Against Humanity.

“This new instrument would fill a significant gap in the current international framework and facilitate international cooperation to protect civilians,” he said.

Less than three weeks after Albania became the object of two cyber attacks by Iran, resulting in the severance of relations with the Islamic Republic, Mr. Rama – who called them “flagrant violations” drew attention to the importance of cyber security and maintaining responsible for the actors who threaten it.

“We call on the United Nations, including the Security Council, to focus more seriously and more concretely on addressing cyber security, investing in prevention and helping all member states to build stability and resistance,” said Mr. Rama.

Speaking about the Balkans and Kosovo, Mr. Rama said that the oppression and suffering of the past, including the genocide in Srebrenica and ethnic cleansing in Kosovo, will not be forgotten.

“The bill is here and will continue, and we must redouble our efforts to make it possible for it to follow its course unhindered. This requires firm commitment to the ideals of justice and, above all, cooperation between the parties”.

He also spoke about Albania’s initiative to reject the Marty report.

“We think and hope that, precisely, the Assembly of the Council of Europe will honor the truth and accept Albania’s request to have a follow-up report, while the damage has been done and help restore the credibility of such an important organization international”, he said.

He also spoke about the Open Balkans, saying that his best message is that “it is not necessary to agree on everything in order to leave behind the dark past and build, step by step, a bright future “.

“Strengthening its relations with Serbia and moving forward to promote bilateral and regional cooperation, Albania has not moved and will not move an inch from its unwavering stance in support of the need for every country, even among you who do not has done this, including Serbia, to recognize the Republic of Kosovo”, he said.