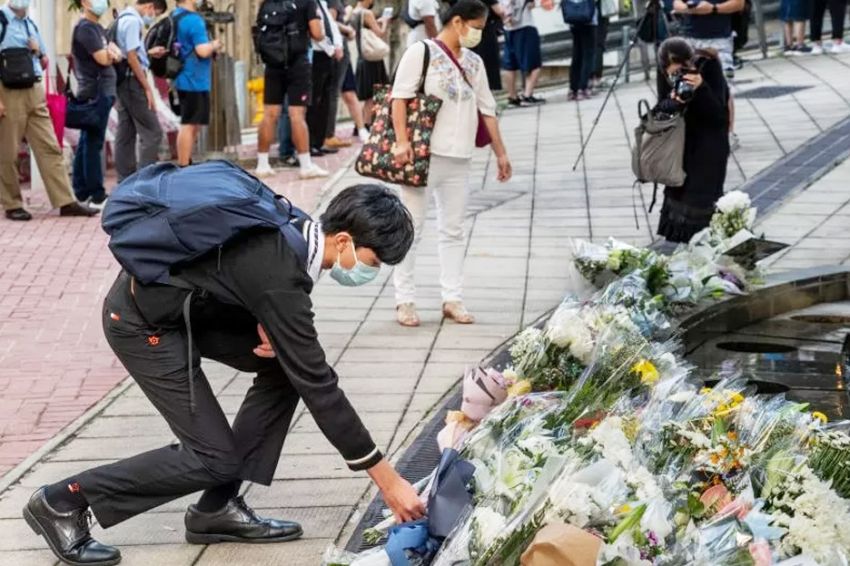 Photo of a mourner laying wreaths outside the British Consulate General. Photo/BBC

HONG KONG – A Hong Kong man who went to the British consulate on Monday evening to pay respects to Queen Elizabeth II, was among a number of mourners, has been detained.

Local media reports said the 43-year-old played several songs on his harmonica, including those related to the 2019 protests, as well as the British national anthem.

This law has rarely been used by prosecutors.

But the last few months have seen an increase in the number of people charged under the law, including five speech therapists who were found guilty earlier this month of publishing children’s books deemed “seditious”.

Footage widely shared on social media shows a man standing outside the consulate playing “Glory to Hong Kong”, the protesters’ unofficial anthem during the 2019 pro-democracy protests, while playing his harmonica.

Large crowds, who gathered to watch a live online broadcast of Queen Elizabeth II’s state funeral later in England, were seen singing along to the song.

The song’s lyrics refer to the words “tears in our land”, and also mentions “democracy and freedom”.

Police told the BBC the man had been detained on suspicion of “acts with seditious intent”.

Cyber ​​attack and the media, reactions against the order of the Prosecutor’s Office of Tirana

Cyber ​​attack and the media, reactions against the order of the Prosecutor's Office of Tirana