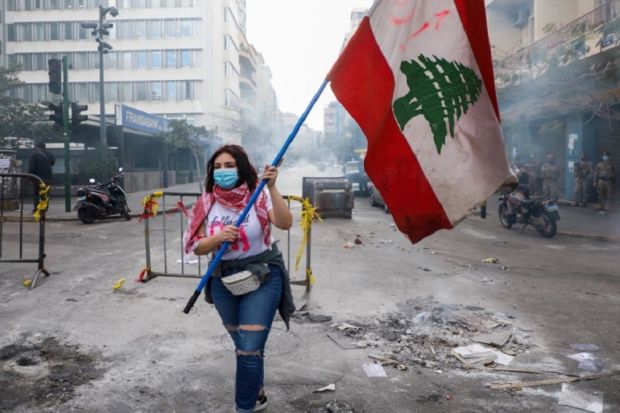 A demonstrator carrying the Lebanese national flag takes to the streets in Beirut, protesting the worsening economic conditions. Photo/REUTERS/Mohamed Azakir

BEIRUT – It’s a weekday, but a civil servant of the Ministry of Finance Lebanon 50-year-old Walid Chaar is out of work and hasn’t worked since June.

He rushed to water the garden at his home in the hills south of Beirut, using the state’s one-hour electricity allotment to operate the sprinklers.

He then called his mother, who was struggling to get a new passport at a state agency grappling with paper and ink shortages.

“The public sector will end if we continue like this,” Chaar complained to Reuters,which was launched Friday (19/8/2022).

Like thousands of civil servants in Lebanon, Chaar has been on strike for two months because his wages were not paid due to Lebanon’s severe economic crisis—one of the worst in the world in modern times.

The paralysis of the public sector spreads further – this week judges staged a protest, while soldiers worked in other sectors to feed themselves and government offices ran out of electricity and basic office supplies.

The country’s infrastructure, already depressed by years of unchecked spending, rampant corruption, and a preference for quick fixes over sustainable solutions, has hit a breaking point.

“We are in a state of collapse,” said Lamia Moubayed of the Lebanese Institute of Finance Basil Fuleihan, a research center in the Lebanese Ministry of Finance.

In Parliament, there is no fuel to run generators for lift—so the security guard ran messages up and down the stairs among the workers.