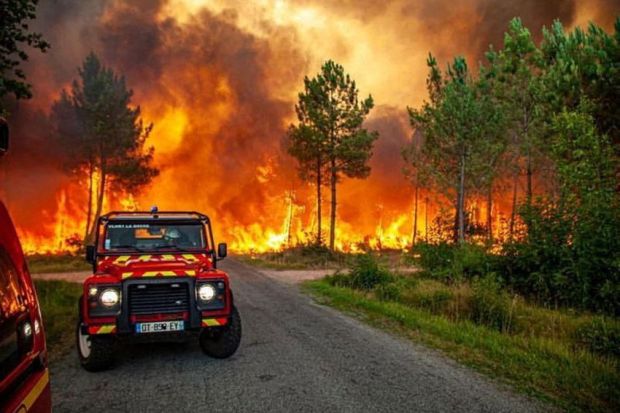 PARIS – Forest fires in the southwest French continued on Saturday (16/7/2022). The fire, which has entered its fifth day, has reportedly destroyed more than 10,000 hectares of forest land and displaced thousands of people.

As Anadolu Agency reported, efforts to contain the fire had failed, local authorities said. The fires that have been burning in the Gironde and in the Bouches-du-Rhone department since Tuesday have grown amid a persistent heat wave gripping the country.

Baca: In 5 Months 472 Hectares of Land in South Sumatra burned, the Most in OKI District

“More than 1,000 firefighters, supported by two aircraft, are still engaged on the ground,” according to the latest statement from Gironde prefecture.

During a trip to Calvados on Friday, Prime Minister Elisabeth Borne confirmed that an electric vehicle caused the fire at La-Teste-de-Buch, located near Arcachon in Gironde. “I appeal to people to take responsibility, because almost “80% of forest fires are thought to be started by humans,” he told BFMTV.

The two fires combined have burned more than 10,000 hectares of forest land leading to the evacuation of at least 12,200 people since the start of the crisis.

As fires spread in Landiras, an additional 2,200 residents of Sud-Gironde were evacuated and firefighters were stationed at sensitive points to protect residential houses, Sud Ouest news reported, citing the Gironde Fire and Rescue Department (SDIS).

In La Teste de Buch, a total of 10,000 people have been evacuated since Tuesday. A restaurant, three houses and several cabins were destroyed, Sud Ouest reported.

3 Recommended Retinol Products for Beginners, Pay Attention to Tips for Use!