Indonesia U-19 vs Myanmar U-19 Results: Garuda Nusantara Goal Party in the Closing Match 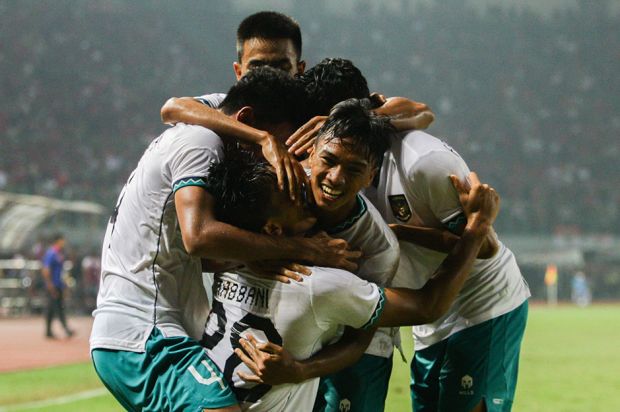 The U-19 Indonesian National Team scored a goal during the final match of the Group A phase of the U-19 AFF Cup against Myanmar U-19. Competing at Patriot Candrabhaga Stadium, Garuda Nusantara won 5-1, Sunday (10/7/2022) / Photo: MPI (Aldhi Chandra)

BEKASI – Indonesian U-19 National Team Goal party during the final match of Group A AFF U-19 Cup against Myanmar U-19 Competing at Patriot Candrabhaga Stadium, Garuda Nusantara won with a score of 5-1, Sunday (10/7/2022).

In this match, the Indonesian national team was surprised by a quick goal from Myanmar U-19 when the match had only been running for six minutes. It was La Min Htwe, who opened the scoring for the visitors.

Indonesian U-19 National Team Those who need victory don’t just give up. Shin Tae-yong’s troops also managed to make an extraordinary comeback by scoring four goals while turning things around to 4-1.

In the second half, Indonesia U-19 were forced to play somewhat defensively. Myanmar also had a golden opportunity to reduce the position.

Luckily, Cahya appeared extraordinary under the crossbar when he managed to ward off La Min Htwe’s close-range shot in the 61st minute. 10 minutes later, Ronaldo Kwateh listed his name on the scoreboard.

The position again changed to 5-1. In the remaining time of the match buying and selling attacks continued, but until the long whistle sounded the score was 5-1 unchanged.

Despite winning, Indonesia U-19 failed to reach the semifinals. This followed the draw between Vietnam U-19 and Thailand U-19 with a score of 1-1.