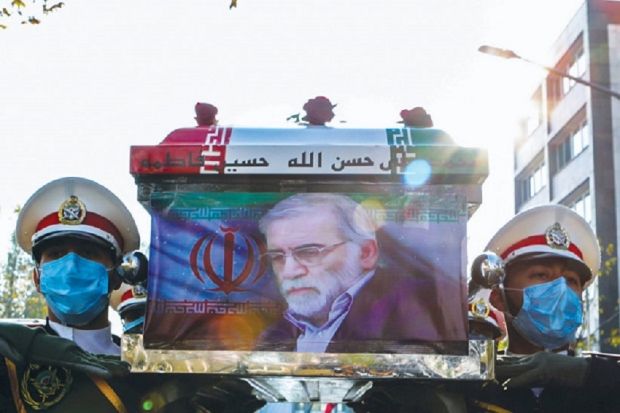 Iranian troops carry the coffin of Mohsen Fakhrizadeh, the slain nuclear scientist. Iran demands that the US pay Rp. 59.3 trillion in compensation for the killing of its nuclear scientists. Photo/WANA via REUTERS

TEHERAN – Court Iran decided to sue the United States (US) to pay more than USD4 billion (more than Rp. 59.3 trillion). It was as compensation to the families of the para assassinated nuclear scientist in recent years.

Iran has accused the United States, Israel, or both, of carrying out a series of assassinations targeting key figures, including the November 2020 killing of prominent nuclear scientist Mohsen Fakhrizadeh.

“It is clear that the Zionist regime committed a crime by killing Iranian scientists,” the Iranian court ruling reads, as reported AFPFriday (24/6/2022).

Also read: Getting to know Mohen Fakhrizadeh, the ‘Father of the Iranian Nuclear Bomb’ who was killed

“Washington supports Israel directly and indirectly and holds the United States responsible for all actions, including aiding, supporting and carrying out terrorist acts against Iranian scientists,” the ruling added.

The US government has not commented on the compensation demands.

Fakhrizadeh was killed on the outskirts of Tehran on November 27, 2020. He was in a car being fired upon with advanced weapons.

Intelligence reports cited by US media referred to it as an operation by Mossad, Israel’s intelligence agency. However, the Zionist regime has neither officially confirmed nor denied involvement in the killing.

Iran’s 2015 nuclear deal with world powers including the US provided Tehran with sanctions relief in exchange for curbs on its nuclear program to ensure that it could not develop nuclear weapons, something Iran has always denied wanting to do.

But the US unilaterally withdrew from the deal in 2018, and reimposed sanctions, prompting Iran to start scrapping its own commitments.

14 Home Cooking Recipes for a Week, Delicious Meals on a Budget of IDR 500 thousand

14 Home Cooking Recipes for a Week, Delicious Meals on a Budget of IDR 500 thousand