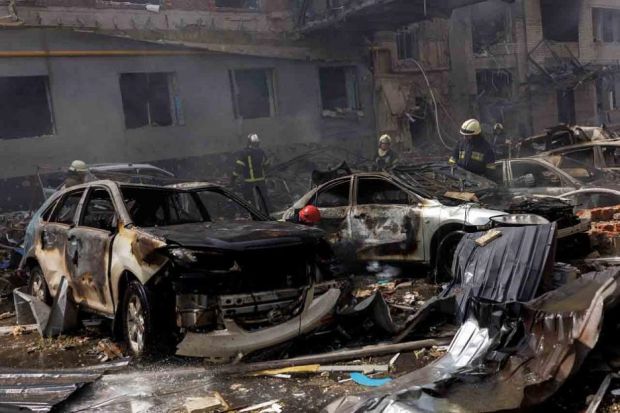 Nikita Mirzani’s child cries while watching Cristiano Ronaldo at the World Cup: This is the most beautiful gift

Cars were charred by the Russian invasion of Kharkiv, Ukraine, a few weeks ago. Photo/REUTERS/Alkis Konstantinidis

JAKARTA – Investigations carried out by various agencies found many crimes against humanity committed by the army Russia systematically during his invasion of Ukraine . The invasion has been running for three months since it began February 24.

Ukrainian authorities this week reported the discovery of 200 bodies in a crypt in Mariupol. Workers digging through the rubble of an apartment building make a grim find, making him one of the war’s deadliest victims.

According to the Ukrainian Embassy to Indonesia, to date the massacres in Bucha, Irpin, Hostomel, Borodyanka and the humanitarian disaster in Mariupol require a swift legal response from the international community.

“Those who commit such atrocities must be immediately brought to justice, including by the International Criminal Court,” said Ukrainian Ambassador to Indonesia Vasyl Hamianin.

Read also: Asked to hand over territory to Russia, Advisor Zelensky: Damn, are you crazy?

Crimes against humanity committed by the Russian military have received great attention from the International Criminal Court (ICC), which on Tuesday (17/5/2022) sent a team of 42 people to Ukraine to investigate alleged war crimes since the invasion began.

In a statement, ICC Chief Prosecutor Karim Khan said the deployment of the team was the largest consisting of investigators, forensic experts and support staff and would work with Ukrainian authorities.

The ICC is an agency founded in 2002 to investigate the world’s worst crimes. The ICC team will initiate individual and group investigations into crimes that fall within the jurisdiction of the International Criminal Court and provide support to the Ukrainian national authorities.

The European countries involved in deploying the ICC team were the Netherlands and France which sent a large number of experts to assist the mission.

As is known, the ICC Prosecutor immediately announced an investigation into alleged war crimes and crimes against humanity since February 28.

6 Interesting Facts about Aghniny Haque, Ayu’s Actor in the KKN Film in Dancing Village, Turns Out to Have Been An Athlete! SuaraCianjur.id - The latest data from the Regional Disaster Management Agency (BPBD) of West Java Province states that there was...

Three unidentified insurgents detonated a car bomb on Friday (2/12) and tried to storm the headquarters of the Afghan party... Nikita Mirzani’s child cries while watching Cristiano Ronaldo at the World Cup: This is the most beautiful gift loading...Nigerian President Muhammadu Buhari said weapons sent to Ukraine had begun to be filtered to be sent to the African...