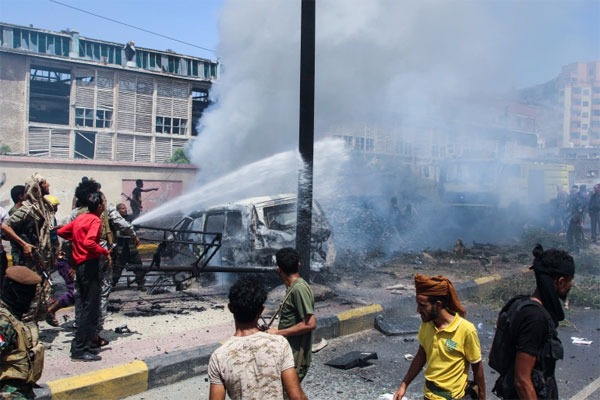 ADEN – Governor Ahmed Lamlas and Agriculture Minister Salem al-Suqatri survived a car bomb that killed at least six people. The bomb which targeted the convoy of the governor of Yemen’s Aden Province rocked the port city in southern Yemen, Sunday (10/10).

Information Minister Moammar al-Iryani said the explosion killed six people among Lamlas’ comrades and injured at least seven passers-by. Also killed in the attack were the Governor’s Press Secretary and his photographer, as well as several members of the Governor of Aden’s entourage.

A circulating photo shows a body covered with a blanket lying on the road next to a charred vehicle in the al-Tawahi district, which houses the headquarters of the Southern Transitional Council (STC). Firefighters and police were dispatched to the scene.

Lamlas is Secretary General of the STC, a separatist group that has been competing with the Saudi-backed government for control of Aden and the wider southern region of Yemen. Al-Suqatri is also a member of the United Arab Emirates-backed STC, which has seen infighting among its ranks.

The government and the STC are nominal allies under the coalition led by Saudi Arabia, which has been battling the Iran-aligned Houthi movement. Instability in the south complicates UN-led peace efforts.

Today’s Zodiac: A Row of Trivial Things That Can Make Libra Lucky in 2021, Orange is one of them!

Albanian MPs and the government crisis in Montenegro Albanian MPs and the government crisis in Montenegro