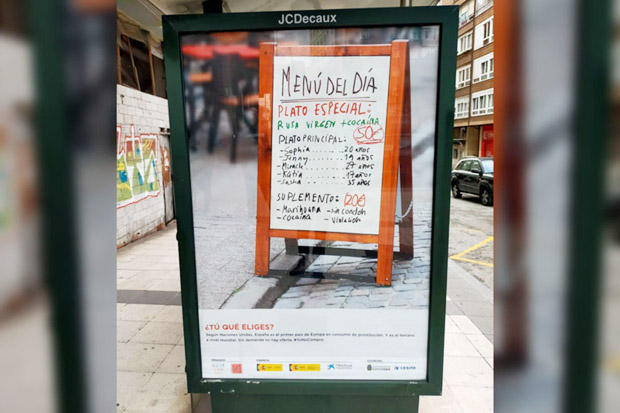 MADRID – Embassy Russia in Madrid has lodged a protest with officials Spanish after a human rights group placed billboards in a number of cities. In the ad, non-governmental organization The (NGO) lists illegal drugs and young Russian women for sale as part of the campaign.

Advertisement posted last week to mark Anti-Day Human trafficking international, featuring a restaurant-style chalkboard offering special dishes of “Russian virgins and cocaine Other lists include “Katia, 17,” and “Sophia, 20,” for $58 each. Prospective “consumers” are also told that for an additional fee, they can smoke marijuana, inhale prohibited narcotics. , and not using condoms.

The organization that placed the ad, Asociacion NUEVA VIDA, described it as part of an effort to “eliminate prostitution”, apparently aiming to shock passersby into supporting an end to the exploitation of trafficked women. Supporters of the movement were challenged to find marketing materials on the street and upload menus of alleged teenage girls with the words “don’t buy”.

But the outspoken belief in stereotypes about Russian women has apparently angered Moscow’s diplomatic representatives in the country.

“Our colleagues living in Spain are outraged by the PR stunt from NGOs, sharing online the placement of provocative banners on the street, naming Russian girls as part of a campaign to attract attention. against the problem of prostitution in this country,” the Russian Embassy said in a statement Russia Today, Tuesday (28/9/2021).

Russian diplomats went on to say that the publicity calls were inappropriate and demanded that the authorities take immediate action to remove the posters and prevent further such incidents.

Along with other former Eastern Bloc countries such as Ukraine, Russia has faced relatively high levels of human trafficking in recent years. Its citizens were promised jobs and better lives elsewhere before being forced to work to repay debts to people smugglers.