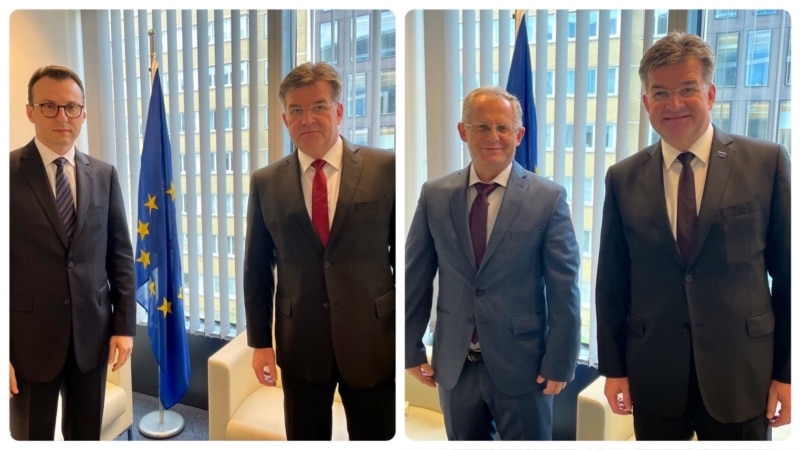 European Union officials said a meeting of Kosovo and Serbia negotiating team leaders Besnik Bislimi and Petar Petkovic is expected to be held in Brussels on Wednesday to discuss a way out of the situation following Kosovo’s decision to implement the reciprocity measure. license plates with Serbia.

A spokesman for the US embassy said the meeting was expected to be attended by Deputy Assistant Secretary of State for Southern and Central Europe Gabriel Escobar.

“We are pleased that Serbia and Kosovo will send representatives to Brussels this week for discussions and encourage both sides to re-engage openly, seriously and promptly in the process,” the embassy spokesman said in a written response to Zeri. of America.

Mr Escobar warned in an interview with VOA on Friday that “on the issue of license plates we would like to see some moves in Brussels, probably as early as next week”.

For eight days in a row, groups of Serb citizens in northern Kosovo have been blocking roads leading to the border crossings with Serbia, Jarinje and Brnjak in protest of the license plate decision.

As of last Monday, cars entering Kosovo from Serbia must receive temporary license plates, just as cars from Kosovo have been operating in Serbia for more than ten years.

Belgrade reacted angrily and announced the increase of military readiness near the border with Kosovo. Serbian President Aleksandar Vucic demanded the withdrawal of special police units from northern Kosovo and the cancellation of reciprocity for car license plates.

Pristina said it was ready to give up temporary license plates if Belgrade did the same, while accusing Serbia of inciting tensions.

The Prime Minister of Kosovo, Albin Kurti, reiterated on Monday that the deployment of special police units in the north was not directed against Serbs, but for the protection of border crossings and police.

Western diplomats are calling for easing tensions and expect Wednesday’s meeting between the parties to help.

NATO peacekeepers said Monday they have stepped up patrols across Kosovo, including the north.

“KFOR has taken further steps on the ground, increasing patrols along the main roads affected by the blockades and deploying its units at the border crossings in Jarinje and Brnjak, in accordance with its mandate, which derives from Resolution 1244 of 1999 UN Security Council. KFOR has also held talks, with all parties involved, to end protests in northern Kosovo. The measures, discussed earlier by the KFOR Commander with all Kosovo institutions and with the mayors of the northern municipalities, are aimed at helping to quickly reduce the tensions created last week and restore a safe environment. and freedom of movement for all communities in Kosovo “, it is said in a communiqué of the peacekeeping forces.