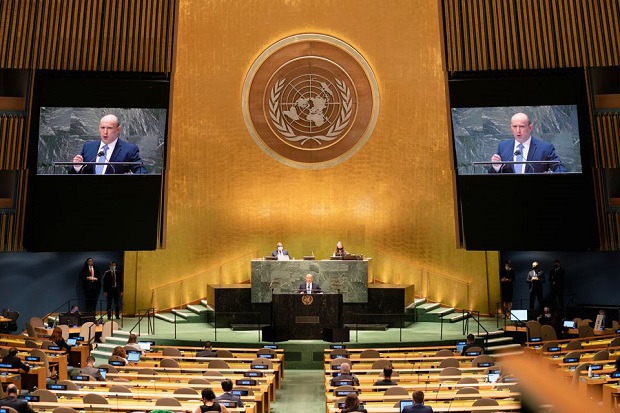 The accusations by the Zionist regime leader were delivered in his speech at the UN General Assembly auditorium on Monday (27/9/2021) New York time, which was mostly empty.

“Iran’s great goal is very clear to anyone who cares to open their eyes,” he said.

“Over the past few years Iran has made great leaps in its nuclear research and development, its production capacity, its enrichment. Iran’s nuclear weapons program is at a tipping point. All red lines have been crossed, inspections ignored, all wishful thinking proved wrong.”

Read also: This is a US F-35 Randomized Demon Fighter Jet in Battle

Benjamin Netanyahu’s successor said Iran’s nuclear program had reached a pivotal moment. He warned that his country’s tolerance had run out.

“Israel will not allow Iran to acquire nuclear weapons. And I want to tell you something—Iran is much weaker, much more vulnerable than it appears,” Bennett added, stressing Israel and its allies can and will win against Tehran. Corset Controversy, Is It Safe To Wear A Corset After Childbirth? This is the explanation

SuaraSumedang.id - The condition of pregnant women who have given birth, shows a distended stomach, and often causes complaints by...