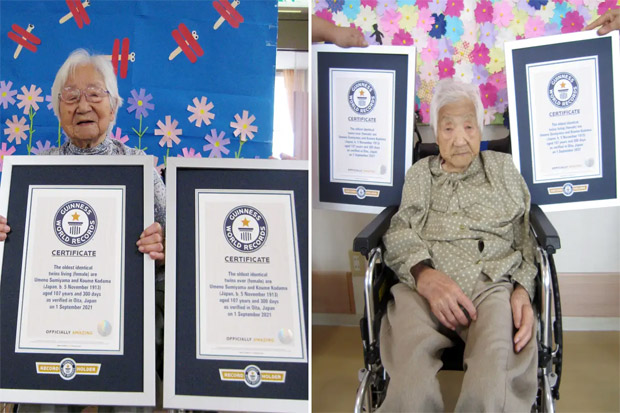 TOKYO – A pair of original women Japan has been named as twin oldest identical in the world. The two have lived for 107 years and 300 days as of September 1st, as announced Guinness World Records .

Umeno Sumiyama and Koume Kodama were born on November 5, 1913, on Shodo Island in western Japan. They are the third and fourth siblings of a family of 11 children.

Both told Guinness World Records that their parenting style was like a TV drama. Sumiyama and Kodama are bullied at school because of twins, which they say was the toughest experience of their childhood.

Also read: This TikTok artist is crowned the owner of the world’s biggest mouth

When they finished elementary school, Kodama was sent to work as a maid on the southwestern Japanese main island of Kyushu, reports the AP.

According to Guinness World Records Sumiyama later married a resident of Shodo Island, while Kodama married someone from outside the island.

About 190 miles apart, they saw each other mostly at weddings and funerals. “But when they turned 70, they reconnected and started doing the Buddhist pilgrimage together,” Guinness World Records said.

They now live in separate nursing homes, and their family told Guinness World Records that the twins were very friendly and positive, and they often joked about surpassing Kin Narita and Gin Kanie, the previous record holders for the title of oldest living twins. loading...Wang Zhenxi, a Chinese woman who works as a mistress persuasion master, a professional whose job is to convince mistresses...