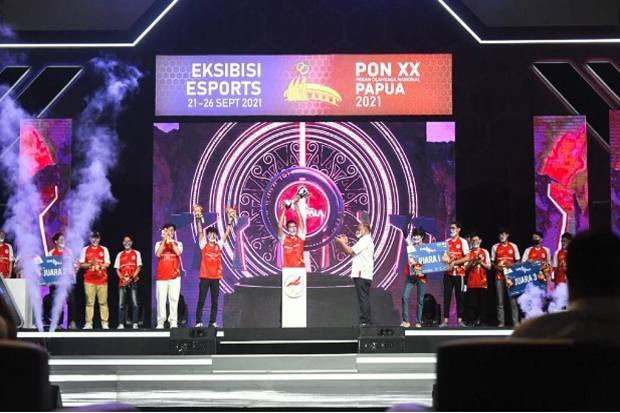 JAYAPURA – Strength of athletes sports who competed in the 2021 PON XX Papua Esports Exhibition, were fairly evenly matched with stiff competition. This is evidenced by the struggle for gold medals in four competition categories divided equally by four provinces.

In the PUBG Mobile category, the DKI Jakarta Team consisting of Eksa, Jason, Bagas and Bagus managed to win a gold medal after eliminating the West Papua Team who had to settle for the silver medal and North Sulawesi as the bronze medal winner. Meanwhile, for the Free Fire category, the Southeast Sulawesi team won the gold medal, which consisted of Rafli Aidil Fitrah, Muhammad Fikri Alief, Sapri Danmas Budiana, and Muhammad Tauhid. The Bengkulu Team won the silver medal and the bronze medal for this category was won by the Maluku Team.

In the PES 2021 category, West Java’s favorite team, which was strengthened by Rizky Faidan and Ferry Purnama Gumilang, won a gold medal after defeating another strong team, namely the South Kalimantan team who had to settle for a silver medal. The bronze in this category was won by the Gorontalo Team.

This 2021 PON XX Papua Esports Exhibition has become a new milestone for the country’s esports world which has finally officially closed. “The strength of esports athletes competing in the XX Papua 2021 PON Esports Exhibition is very evenly distributed. There is no single province that appears dominant. This confirms that coaching in all provinces in Indonesia has been going well and there are no gaps,” said the Secretary General of the Management. Indonesian Esports Leader (PBESI Secretary General) Frengky Ong after the closing of the event in his press statement, Monday (27/9/2021).

Frengky said, with the more serious development carried out by PBESI and ESI in provinces as well as districts/cities, and supported by the increasingly even distribution of broadband networks which the government continues to expand its reach, PBESI is optimistic that it will be able to attract more potential esports talents who are ready to make a name for themselves. Indonesia on the international stage.

The success of the PON XX Papua 2021 Esports Exhibition according to Frengky has also aroused public attention about the potential of this electronic sport in helping to drive sportainment and sport-tourism activities that have economic value.