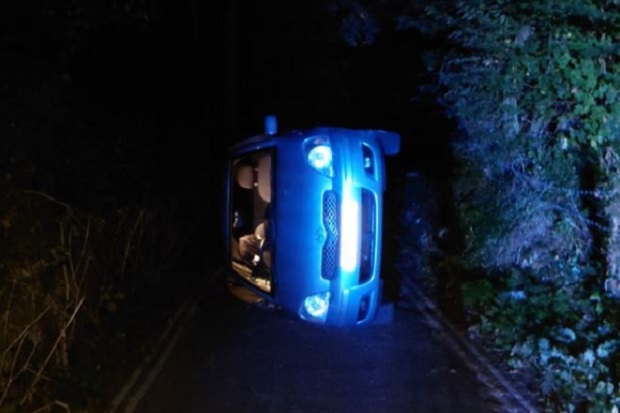 DERBYSHIRE – A couple of lovers English become a laughing stock for the police because have sex too aggressive in the car. As a result of their actions, the hand brake was cut off, the car slid down the hill until it overturned.

The incident was experienced by supermarket workers, Brad Sadler, 18, and his girlfriend in a parking location. They previously had a romantic date at McDonald’s. Luckily the couple is still safe.

Brad left the car engine running and turned on the music before he and his girlfriend jumped into the back of his Toyota Yaris for some fun. But their aggressive behavior knocked the handbrake off, which sent the car sprinting down a steep hillside.

Brad, who was naked, said the car then rolled across the road before tipping over. Milkshake the couple’s chocolates were also splattered everywhere.

“I was trying to get it out of my mind until my date screamed, ‘The car’s moving!’. There was a loud sound when the handbrake broke.”

Brad and his girlfriend survived in the overturned car for up to 15 minutes. He ended up handing the car keys to two passersby to help get himself out of the car.

The young man from Matlock, Derbyshire, then spent the next ten minutes searching for his clothes.