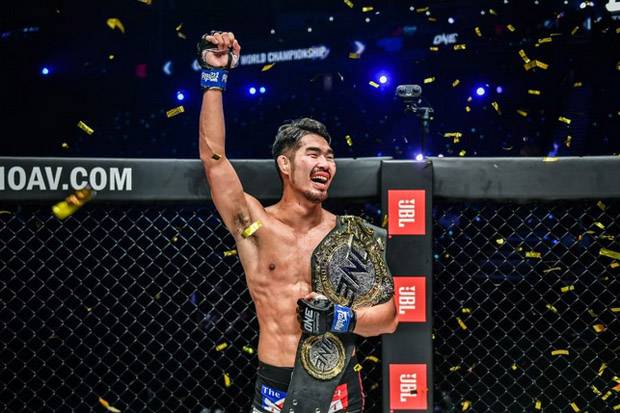 SINGAPORE – South Korean fighter Ok Rae Yoon made a surprise claim to the ONE Championship Lightweight world championship belt at the Singapore Indoor Stadium, Singapore, Friday (24/9) night. His success was obtained after defeating defending champion Christian Lee in a match titled ONE: REVOLUTION.

In the main match, the third-ranked lightweight fighter Ok Rae Yoon appeared in a counterpunching style. Instead, Lee played fast, sharp and strong to start the fight. Ok weathered the early storm of the young fighter, and he got stronger as the fight continued.

In the third round, Ok rocked Lee and made him stagger across the Circle. A right-handed counter from Lee brought down the South Korean fighter, and towards the end of the first round, “The Warrior” grabbed Ok’s back and locked it with a rear-naked choke under his chin.

The fighter from the Ginseng Country survived the submission attempt and turned it into a fierce battle for the last two rounds. In the end, the three judges judged the match in favor of Ok to win by unanimous decision, and entitled to lift the ONE Lightweight world title belt on his shoulders.

READ ALSO: MU vs Aston Villa Premier League: Prepare a Calculator! How many goals did Ronaldo score against the Lions?

Meanwhile, female fighter Victoria Lee continues the winning trend even though Christian Lee’s sister is still young. The victory he won against Victoria Sauza was the third in a row, and the victory was won by TKO in round 2, minute 3:58.

The sensation of the 17-year-old teenager occurred from the beginning of the first round, and Victoria was quite dominant over the debutant fighter. The two atomweights traded blows to open up the first round, but it wasn’t long before the fight hit the ground, and Lee was shining once again. In the second round, Lee unleashed an elbow strike from top position to force the match to an end.