Mother Canelo’s Anger Humiliated Caleb Plant: Thanks For Beating Her Up! 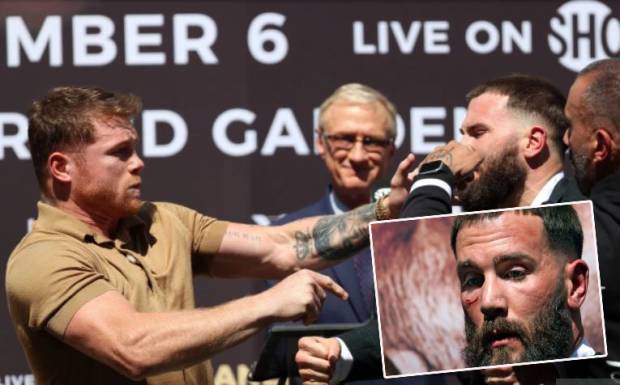 Mother Saul Canelo Alvarez who went berserk thanked him for beating up Caleb Plant who insulted him at the pre-fight press conference. Canelo reveals Caleb Plant insulted his mother while on stage, making his blood boil.

Also read: Saul Canelo Alvarez Reveals the Cause of the fist fight with Caleb Plant

And Canelo explained that his mother thanked him for giving his potential US opponent an early penalty. ”My mother is also angry. He said, ‘Thank you, son, for showing me respect. You have to win’,”Canelo said. Talking about the incident itself, Canelo explained why he started the horrendous fistfight in the pre-fight press conference. ”He talked about my mother. He said, ”you bastard” so you’ve crossed the line there. So that’s why I pushed him and then he came back with a left hook.” An enraged Canelo pushed Caleb Plant’s body. Then, Caleb Plant countered by unleashing a left-handed punch that Canelo avoided. After that, Canelo threw a punch at Caleb Plant’s eye until it bled.

Also read: Dillian Whyte was happy to be paid Rp6 million when he caught Anthony Joshua

The two Super Middleweight champions will have a unification duel in Las Vegas on November 6. Caleb Plant holds the IBF crown, while Canelo is the king of the WBA, WBA and WBO. The Mexican boxer is sure to add Caleb Plant’s IBF belt to his collection of champions. “In the end, this is what I want to do with my career, make history. These things, like being the first to be the first unified champion weighing 76.2 kg, make history,” he said.

“The potential to be one of the few to hold this prestigious honor at any heavyweight makes me very happy. For my country, this would be a huge achievement. I want to be remembered as one of the greatest in the history of the sport.”

9 memorable moments of Daughter DA with her mother, full of warmth

9 memorable moments of Daughter DA with her mother, full of warmth