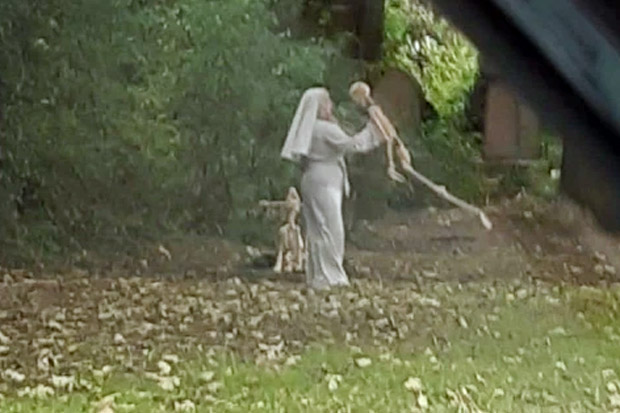 LONDON – A video showing a woman dressed like nun was dancing with human skeleton from public cemetery shock the virtual world.

The unusual sight was caught on camera by a passenger in a car passing through Spring Bank West outside Hull Public Cemetery.

The woman was seen wearing a cream-colored nun’s outfit and a coif headpiece. He looks engrossed in dancing with one model of a human skeleton and playing with another skeleton that looks like a dog.

“Literally, he was standing at the cemetery in Spring Bank West across the corner from Hymers school. He was dancing with a skeleton,” said a shocked witness.

Read also: Viral! This woman ate a hamburger filled with human fingers and had time to chew it

“It definitely drew a lot of attention with people stopping to watch nearby and people in their cars watching.” Daily Mail, Thursday (23/9/2021).

A second person is seen filming the bizarre scene, suggesting that the dancing nun was filmed as part of an act or art project.

The strange sight occurred just before 12 noon on a Saturday on a busy road to Hull.

Hull Public Cemetery has not been in use for nearly 50 years although it remains one of the city’s most historic sites.

4 Luxury Fashion Labels That Hold Vaccination Programs for Their Employees! Anyone?